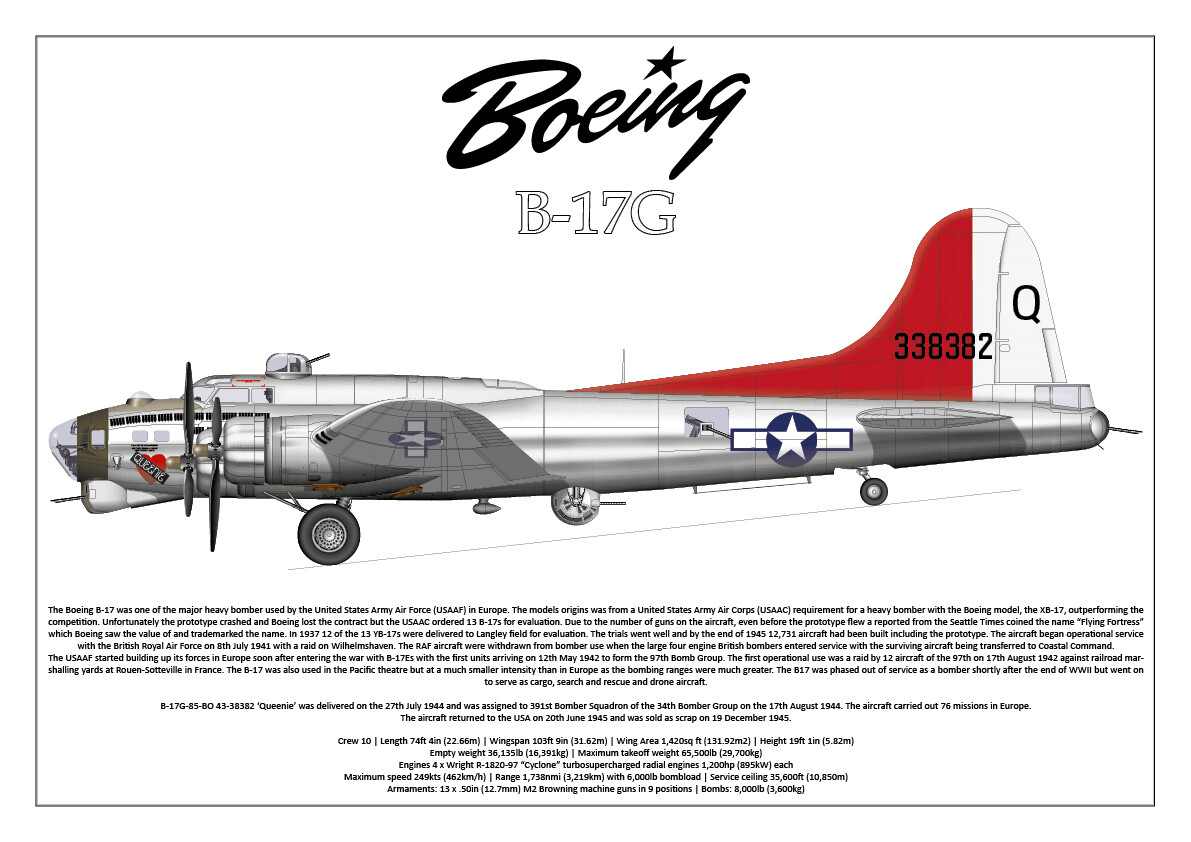 SKU 00247
£10.00
In stock
1
Product Details
Brand: Cockpit Revolution
Product Type: Profile
Aircraft Manufacturer: Boeing
Model: B-17
Operators: USAAF
B-17G-85-BO 43-38382 ‘Queenie’ was delivered on the 27th July 1944 and was assigned to 391st Bomber Squadron of the 34th Bomber Group on the 17th August 1944. The aircraft carried out 76 missions in Europe. The aircraft returned to the USA on 20th June 1945 and was sold as scrap on 19 December 1945.
The Boeing B-17 was one of the major heavy bomber used by the United States Army Air Force (USAAF) in Europe. The models origins was from a United States Army Air Corps (USAAC) requirement for a heavy bomber with the Boeing model, the XB-17, outperforming the competition. Unfortunately the prototype crashed and Boeing lost the contract but the USAAC ordered 13 B-17s for evaluation. Due to the number of guns on the aircraft, even before the prototype flew a reported from the Seattle Times coined the name “Flying Fortress” which Boeing saw the value of and trademarked the name. In 1937 12 of the 13 YB-17s were delivered to Langley field for evaluation. The trials went well and by the end of 1945 12,731 aircraft had been built including the prototype. The aircraft began operational service with the British Royal Air Force on 8th July 1941 with a raid on Wilhelmshaven. The RAF aircraft were withdrawn from bomber use when the large four engine British bombers entered service with the surviving aircraft being transferred to Coastal Command.
The USAAF started building up its forces in Europe soon after entering the war with B-17Es with the first units arriving on 12th May 1942 to form the 97th Bomb Group. The first operational use was a raid by 12 aircraft of the 97th on 17th August 1942 against railroad marshalling yards at Rouen-Sotteville in France. The B-17 was also used in the Pacific theatre but at a much smaller intensity than in Europe as the bombing ranges were much greater. The B17 was phased out of service as a bomber shortly after the end of WWII but went on to serve as cargo, search and rescue and drone aircraft.

Customised B-17 Drawing: Do you want a particular B17 drawn? We can do it for you - please contact us.