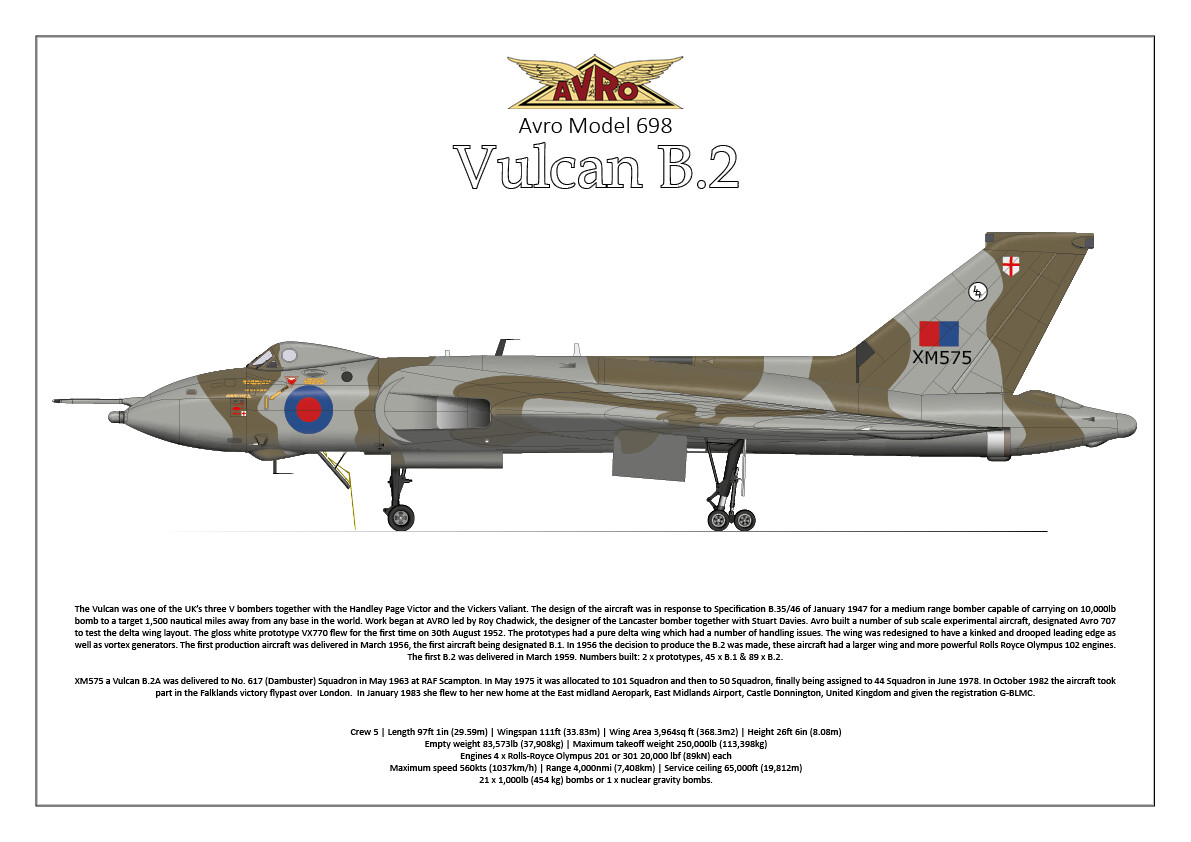 SKU 00294
£10.00
In stock
1
Product Details
Brand: Cockpit Revolution
Product Type: Profile
Aircraft Manufacturer: AVRO
Model: Vulcan
Operators: RAF
The Vulcan was one of the UK’s three V bombers together with the Handley Page Victor and the Vickers Valiant. The design of the aircraft was in response to Specification B.35/46 of January 1947 for a medium range bomber capable of carrying on 10,000lb
bomb to a target 1,500 nautical miles away from any base in the world. Work began at AVRO led by Roy Chadwick, the designer of the Lancaster bomber together with Stuart Davies. Avro built a number of sub scale experimental aircraft, designated Avro 707
to test the delta wing layout. The gloss white prototype VX770 flew for the first time on 30th August 1952. The prototypes had a pure delta wing which had a number of handling issues. The wing was redesigned to have a kinked and drooped leading edge as
well as vortex generators. The first production aircraft was delivered in March 1956, the first aircraft being designated B.1. In 1956 the decision to produce the B.2 was made, these aircraft had a larger wing and more powerful Rolls Royce Olympus 102 engines.
The first B.2 was delivered in March 1959. Numbers built: 2 x prototypes, 45 x B.1 & 89 x B.2.
XM575 a Vulcan B.2A was delivered to No. 617 (Dambuster) Squadron in May 1963 at RAF Scampton. In May 1975 it was allocated to 101 Squadron and then to 50 Squadron, finally being assigned to 44 Squadron in June 1978. In October 1982 the aircraft took
part in the Falklands victory flypast over London. In January 1983 she flew to her new home at the East midland Aeropark, East Midlands Airport, Castle Donnington, United Kingdom and given the registration G-BLMC.

If you want another Vulcan depicted then please contact us.