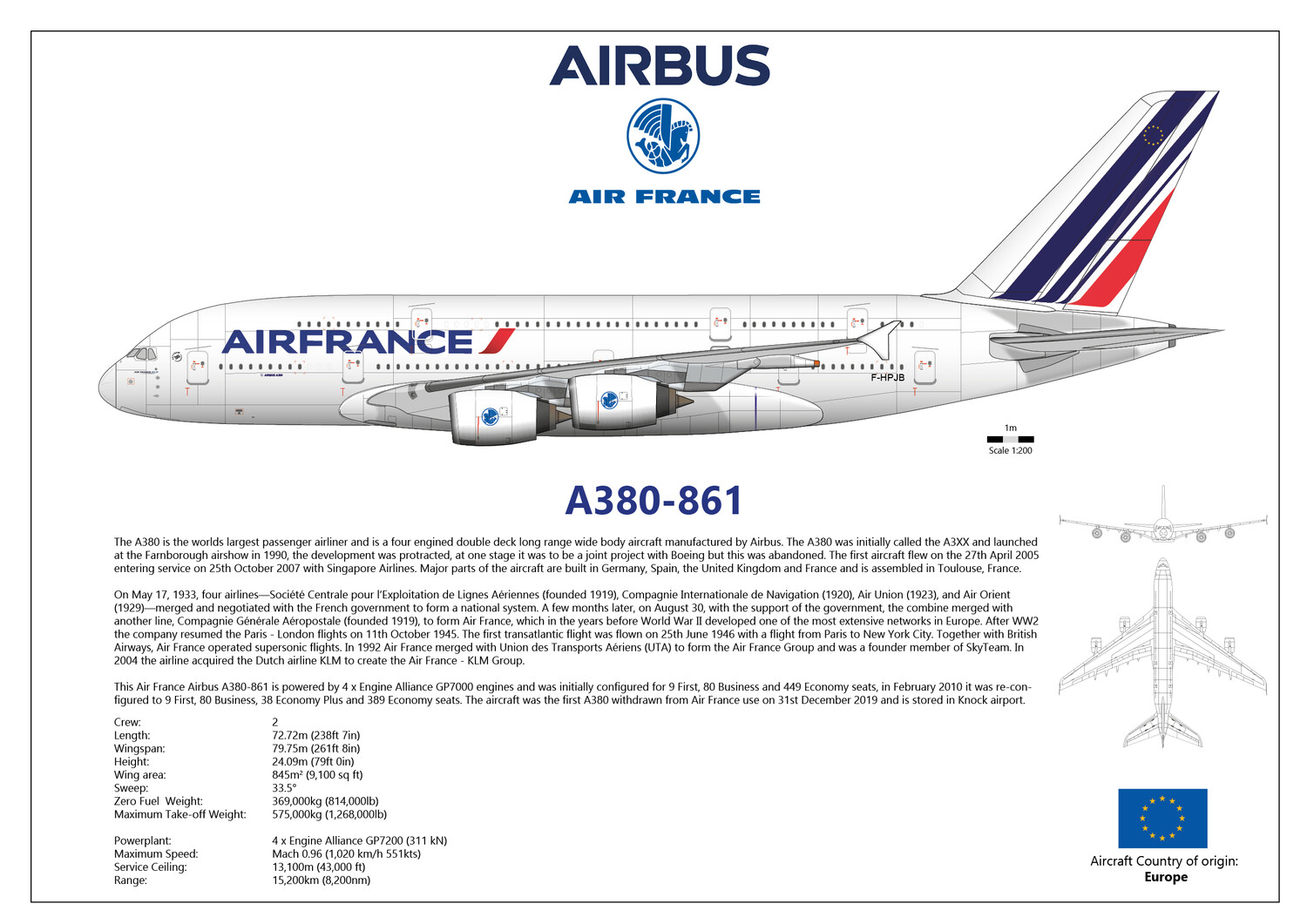 SKU 00506
£10.00
In stock
1
Product Details
The A380 is the worlds largest passenger airliner and is a four engined double deck long range wide body aircraft manufactured by Airbus. The A380 was initially called the A3XX and launched at the Farnborough airshow in 1990, the development was protracted, at one stage it was to be a joint project with Boeing but this was abandoned. The first aircraft flew on the 27th April 2005 entering service on 25th October 2007 with Singapore Airlines. Major parts of the aircraft are built in Germany, Spain, the United Kingdom and France and is assembled in Toulouse, France.
On May 17, 1933, four airlines—Société Centrale pour l’Exploitation de Lignes Aériennes (founded 1919), Compagnie Internationale de Navigation (1920), Air Union (1923), and Air Orient (1929)—merged and negotiated with the French government to form a national system. A few months later, on August 30, with the support of the government, the combine merged with another line, Compagnie Générale Aéropostale (founded 1919), to form Air France, which in the years before World War II developed one of the most extensive networks in Europe. After WW2 the company resumed the Paris - London flights on 11th October 1945. The first transatlantic flight was flown on 25th June 1946 with a flight from Paris to New York City. Together with British Airways, Air France operated supersonic flights. In 1992 Air France merged with Union des Transports Aériens (UTA) to form the Air France Group and was a founder member of SkyTeam. In 2004 the airline acquired the Dutch airline KLM to create the Air France - KLM Group.
This Air France Airbus A380-861 is powered by 4 x Engine Alliance GP7000 engines and was initially configured for 9 First, 80 Business and 449 Economy seats, in February 2010 it was re-configured to 9 First, 80 Business, 38 Economy Plus and 389 Economy seats. The aircraft was the first A380 withdrawn from Air France use on 31st December 2019 and is stored in Knock airport.

Cant find the aircraft in the livery you want?

Then contact us and I will draw it for you.