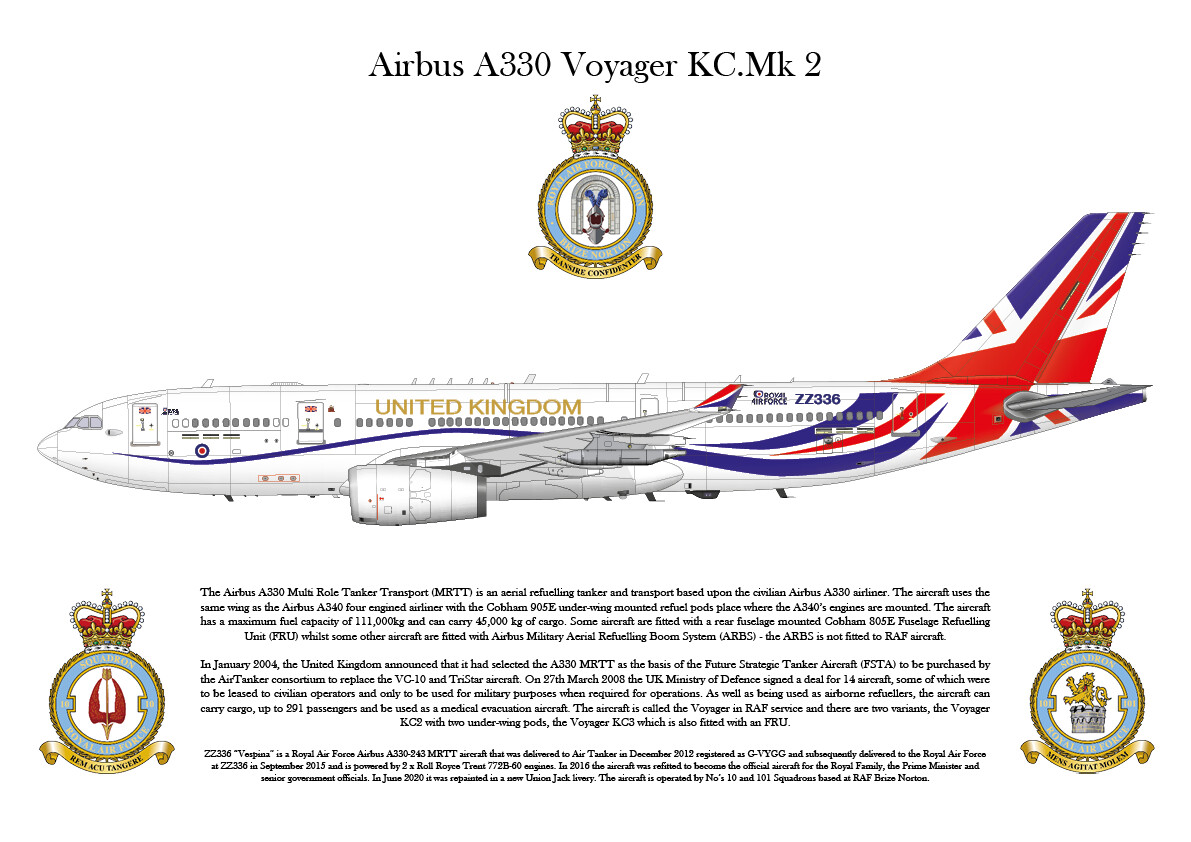 ZZ336 “Vespina” is a Royal Air Force Airbus A330-243 MRTT aircraft that was delivered to Air Tanker in December 2012 registered as G-VYGG and subsequently delivered to the Royal Air Force at ZZ336 in September 2015 and is powered by 2 x Roll Royce Trent 772B-60 engines. In 2016 the aircraft was refitted to become the official aircraft for the Royal Family, the Prime Minister and senior government officials. In June 2020 it was repainted in a new Union Jack livery. The aircraft is operated by No’s 10 and 101 Squadrons based at RAF Brize Norton.

The Airbus A330 Multi Role Tanker Transport (MRTT) is an aerial refuelling tanker and transport based upon the civilian Airbus A330 airliner. The aircraft uses the same wing as the Airbus A340 four engined airliner with the Cobham 905E under-wing mounted refuel pods place where the A340’s engines are mounted. The aircraft has a maximum fuel capacity of 111,000kg and can carry 45,000 kg of cargo. Some aircraft are fitted with a rear fuselage mounted Cobham 805E Fuselage Refuelling Unit (FRU) whilst some other aircraft are fitted with Airbus Military Aerial Refuelling Boom System (ARBS) - the ARBS is not fitted to RAF aircraft.
In January 2004, the United Kingdom announced that it had selected the A330 MRTT as the basis of the Future Strategic Tanker Aircraft (FSTA) to be purchased by the AirTanker consortium to replace the VC-10 and TriStar aircraft. On 27th March 2008 the UK Ministry of Defence signed a deal for 14 aircraft, some of which were to be leased to civilian operators and only to be used for military purposes when required for operations. As well as being used as airborne refuellers, the aircraft can carry cargo, up to 291 passengers and be used as a medical evacuation aircraft. The aircraft is called the Voyager in RAF service and there are two variants, the Voyager KC2 with two under-wing pods, the Voyager KC3 which is also fitted with an FRU.

This high resolution, high quality print is available as an A3 or A4 printed poster.